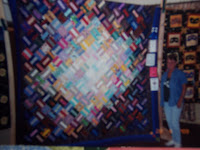 This is the first Basket Weave Quilt I made and  quilted by hand in 2004.When I could not finish the Grandmothers Irish Quilt, this is the one I did next , The pattern came from a Quilt book by Marti Michell , it is a queen size quilt . I made the quilt at Mom's then we put it on her quilt rack and started hand quilting it , I started out with a large heart in the middle with some smaller hearts inside it ,then from there I made wave like lines to the boarder .On the boarder I made smaller hearts overlapping each other all the way around , I think it took about 8 months to make and quilt, however I did not work on it everyday , what I could not do at Mom's I did at home on a smaller oval quilt rack and I have to say it was a difficult process and it took me awhile to use such a small needle and yes my fingers and hands were hurting !
Then in October of that same year I entered the quilt in the Quilt Show at Stephen Foster Quilt Show . I wanted to keep my first quilt as most people do , I asked if I put $500.00 on it will that keep anyone from buying it and everyone I talked to said they did not think anyone could pay  that much  ,Well the first day I went to see the show I got the surprise of my life I had a Blue ribbon ! 1st place !! Then the next day a friend came up to me and said you better get over there to your quilt  . I had a buyer ! I was thrilled but at the same time sad . I really wanted to keep it , I had several people telling me I could have gotten a lot more for it .
I think the one thing that really impressed the buyer was that I told them on paper that while I was hand quilting the quilt I had written a song to go with the name of the quilt which I named it "Bursting With Love "and that I was encouraged to start quilting by my Mom Daisy Schoonover and her quilt teacher Jane Gaunchy, if it had not been for them I never would have done this one .
Posted by Cheryl at 10:54 AM