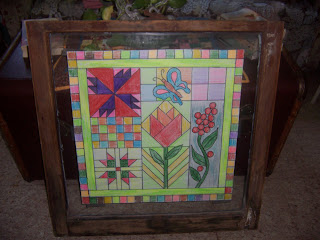 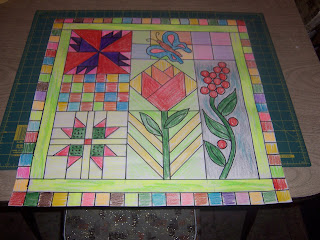 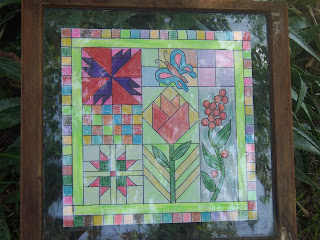 This is a window that I had started working on last year and never did finish it , I have it started by drawing and coloring on paper to see how it would look and used it as a guide too .
I started to paint it and was not happy with the results , I did not take a picture of the paint work yet , Hopefully soon I can get back to it and finish it for Mom..I wanted to hang it up on the outside of her house over the patio area..
The design came out of a Quiltmaker Magazine and is part 4 of a series of  quilt patterns .This one is called Bunny Patch by Lynda Milligan and Nancy Smith.I could make this quilt in no time but painting it is hard to do on glass.
Posted by Cheryl at 12:02 AM 3 comments: 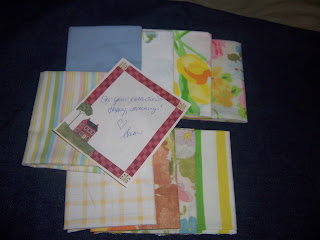 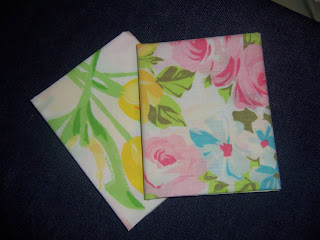 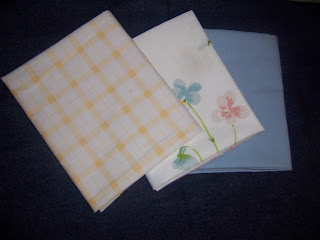 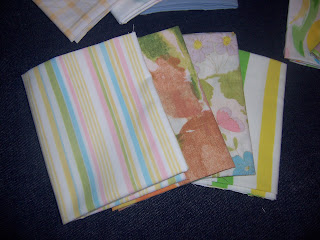 My cousin Susan McConnell sent me all these Fat quarters of vintage sheets .I was amazed that she was able to find so many sheets at the thrift store .She said she had enough to share .
Now to decide how I want to make a quilt out of these.
The two flowered ones are like sheets I used to have a long time ago.No telling what happened to those .
I will post again when I decide the pattern.
Thank you Susan !!
Posted by Cheryl at 12:48 PM 2 comments: 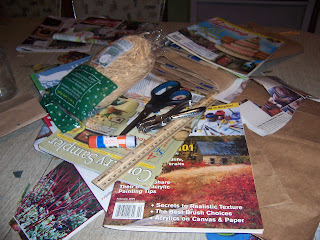 I had 3 of my Grandchildren with me last Saturday night .So after playing outside , on the computer and eating Pizza I decided to let them make a scrap book .
We used brown paper bags the ice cream comes home in , we cut the bottoms off then took out the seam where it was glued and folded in half length wise -cut, then devided in 3's and cut, fold that in half and punched holes in it with a hole puncher then added Raffia  for the binding to hold it together.Which gave us several pages to work with . 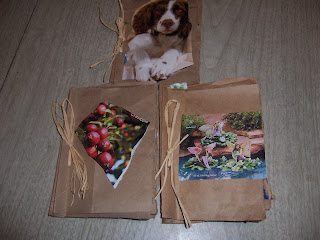 Then I gave them all a bunch of magazine's I no longer wanted to keep , they had a ball cutting out their favorite thing, Chloe left some to draw and color herself . 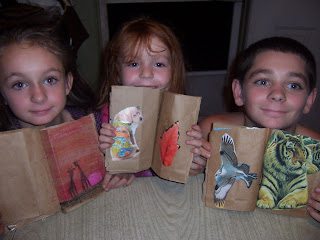 The giraffe's we saw from the computer it was very bright , her favorite animal .Sarah's is Horses and Waylon loves dogs and tigers 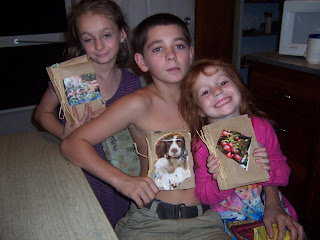 They were pretty tired after this,  we had some ice cream and then they watched some more TV, got up the next morning and went to church with Grandma.
Posted by Cheryl at 10:11 PM 1 comment:

Another one of Mom's Creations 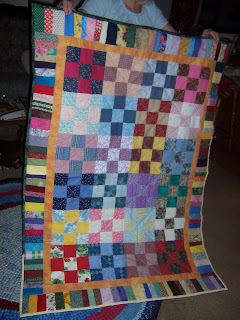 I love how she made the blocks and then the boarder with all the smaller scraps, a good way to use up the left overs. Notice too the different colors for the binding .
Posted by Cheryl at 8:25 PM 1 comment: 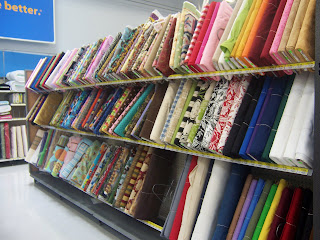 Remember all the fuss about Walmart taking the fabrics out of the stores ?! 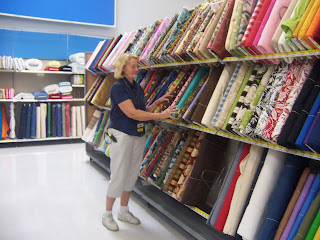 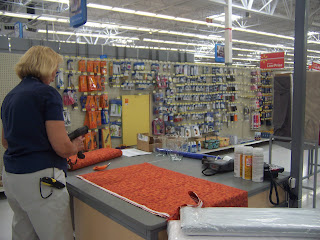 Well they are back ! This is the new fabric Dept. in Auburndale 's Walmart store .
I was so happy to hear they were bringing it back , Only a few of the stores are adding them back .They really never should have taken them away.
Thank you Walmart !! 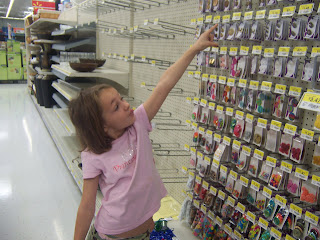 Chloe say's she wants the one way up there ! 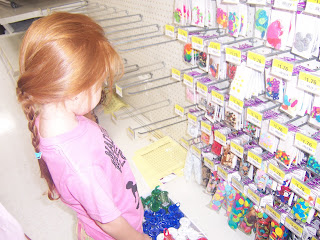 Sarah can't decide because there are so many buttons to chose from ....she loves them all ! 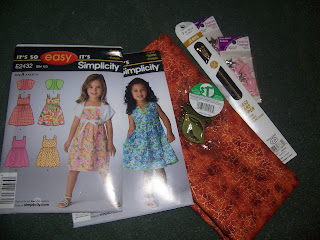 This is my first fabric buy for now , when we get paid I will be going back for more . I do love the quilt shops but they are pretty expensive , and this is closer to home too .Now I can just go there for the necessary items and grab some fabric at the same time .Patterns !.......... would you believe only $1.97 each !
Posted by Cheryl at 3:47 PM 3 comments: 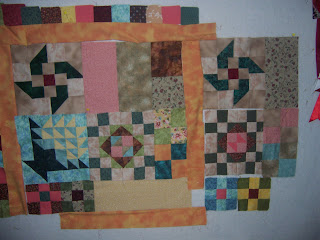 Back in 2008 just before we went to Pa.to visit my sister picked out this pattern from one of my mag.'s called "Quiltmaker" this was part of a pattern called Patchwork Garden. There was a series of 4 lessons or 4 different quilts that could have been put together to make one . 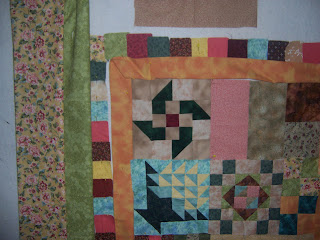 My sister Rexa picked out the colors she wanted , Mom had decided just before I went up last June to try to get it started , she got this much done, it was not very big , I thought it was going to be a wall hanging but Rexa insits it was to be a big quilt , so Mom was having  a hard time trying to make 6 panels just like this one. 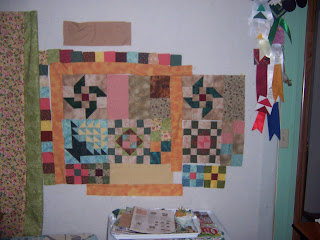 I told her that there were 3 other ones with different pattern designs to go with it but that we really need the other 3 books to do it , I found one here .Anyway my sister Rexa has recently been to visit with Mom and she has made quite a few changes, so hope Mom will be able to get it the way she told me how it was to be done , Rexa says it will be simple, Mom does not agree..... so when I go back later we will see how this turns out . It will probably take her awhile to do it as there are quite a few blocks that call for handwork  .
Posted by Cheryl at 9:44 PM No comments:

Mom Knows How To Stay Busy ! 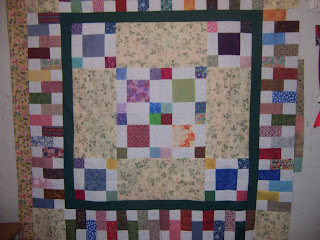 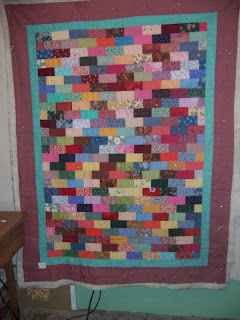 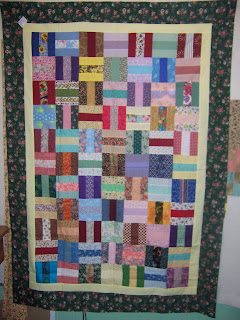 This last one is out of one of her quilt books and it is left over basket weave blocks ,some were matches to ones I have in my large Basket Weave Quilt .Mom knows how to stay busy and loves to make new tops , she always has new ones to show when I get there. So if she is not sewing, she is reading or working outside in her flower garden if it isn't too hot.
Posted by Cheryl at 2:15 PM 3 comments: