Finally I can show this ! Every year we have a secret sister at church with the Ladies group ,Last year I had Jamee ,the pastors youngest daughter , It was hard trying to keep this a secret . 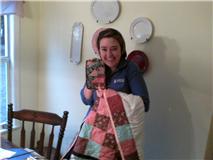 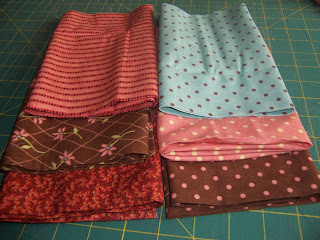 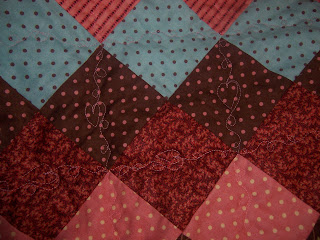 The fabric is the fabric I won from the Quilting Gallery's weekly contest last summer after I won  , I had to order the fabric on-line , I never did that before, there fore I had alot of problems in communications with the shop owner ,we fianly got it straighten out , The colors were a little bit off from what I planned as Jamee was into Paris style and I was trying to stay in the chabby chic .designs .I wanted pinks and chocolete with blues and blacks too . \\ 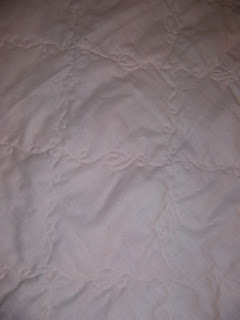 Backing of quilt so you can see the detail of the quilting ,I did the swirls and a few hearts too. 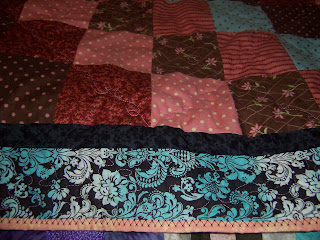 I decided only 1 inch of black was enough then I went to Joanne's and brought the agua ,brown and white for the boarder , I had asked another younger woman for advice and she suggested the peach , I brought both not sure if I would use both or none at all. I liked the boarder and then decided the peach was good for the binding and then I did a fancy stitch to sew it down ,I was in a hurry ,I had been sick all week before the party and then I was un-able to go. 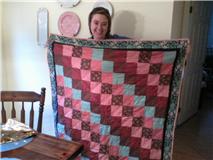 So I sent the gift by her Dad after Robin ,(Jamee's Mom ,because Iwas not feeling good ,cooked us supper)  . Her Dad took these 2 pictures of her for me so you can see her reaction , she said she had hoped I was her S.S. this time and sure enough she got her wish . 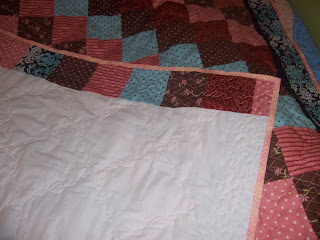 Showing the back of quilt ,I did not have enough muslim to fit so I added some more of the blocks to the sides .I also use pink thread for the machine quilting. 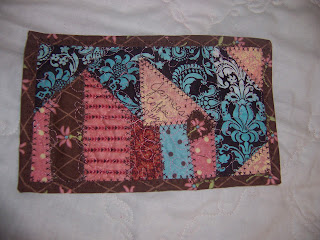 Now this was a reall surprise !!I felt like the quilt alone was not enough & I did not feel up to going to town because of the flu ,so I made myself put this together for a Mug Rug ! And if you click on the picture you will see where I wrote in with thread "Jamee's Coffee Rug"  She was really thrilled with that and I know I should have said Mug Rug ,being sick I was not thinking straight! Looks like I should have squared up better according to the picture but it looked different away from the camera ! ;-)
Posted by Cheryl at 9:22 PM