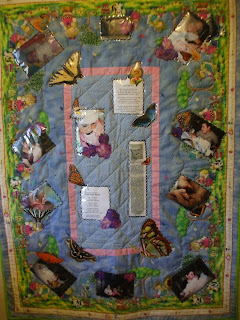 When a Great granddaughter was born with Brittle Bone Disease. the parents (My Oldest Grandson) and Lilah's  mother were told she would not live very long , they only gave her days. She lived  3 months and 12 days.
I had started her a quilt hoping to get it to her before she died ,but she passed on, so I decided to make it a Memory Quilt .I asked my Oldest Daughter Tammy for some pictures and anything in writing to put on it .
At the time I wanted to print the pictures on printable fabric. I had cut out Butterflies to put with the pictures as she loved them. But I did not have a printer so I just had a friend print the pictures on photo paper, I then cut them out and used the plastic folders the students use for school, .put the pictures in side and cut to fit ,then did a fancy stitch around each picture.
Tammy had told me that after she died there were several Butterflies flying around them. I also had that experience with a huge moth like Butterfly.
I had shown it to my daughter when she was here and finished it at Mom's the last time I went to visit her. I will be sending the Memory Quilt to my daughter to keep for everyone to see.
Posted by Cheryl at 9:30 AM